Two Pied Crows (Corvus albus) were seen roosting on palm trees at Tajura (32°53’37.39 N, 13°23’13.33 E), some 20 Km east of Tripoli (western Libya) on 7 June 2013. On 17 June they were seen again and photographed. According to the Libyan Society for Birds, the species have been recorded in eastern Libya only a few times before but this is the first record for western Libya.

The Libyan Society for Birds wishes to thank Khaled Etayeb, Essam Bourass, Ali Berbash and Wagih Bashimam for their help.

Essam Bourass observed again 2 Pied Crows at the same place two weeks ago (i.e. around the end of August 2013). He was not sure if they were adults or not as he haven’t binoculars at the moment of the observation. So at least 2 individuals stayed in this area for nearly 3 months (7 June – end of August). It’s worth checking their breeding status in this area, if not possible this year it should be considered next year.

The Pied Crow is a very rare bird north of the Sahara desert, and there are only a few records in North Africa:

Records from elsewhere in the Western Palearctic region are believed to relate either to escapes from captivity, or are suspected to have arrived by ship (see Batty 2010).

Since these records, the species has been observed several times in different parts of Morocco (at the Strait of Gibraltar in the north; at Mhamid, eastern Sahara; at Tarfaya and Khnifiss Lagoon on the Atlantic coast). 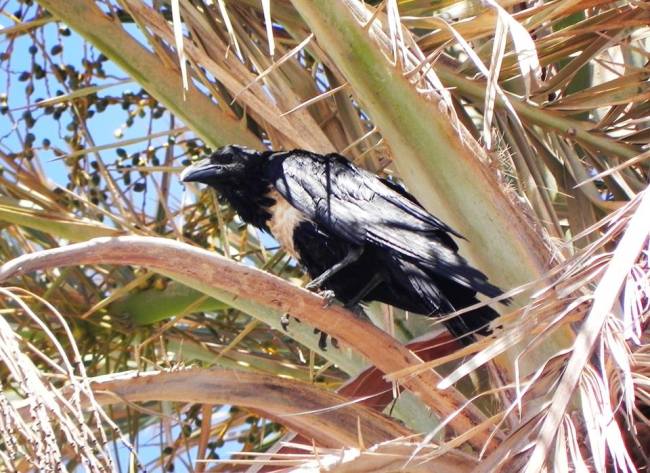