A stabilized hybrid form of the house sparrow (Passer domesticus) and the Spanish sparrow (P. hispaniolensis) is known as Passer italiae from the Italian Peninsula and a few Mediterranean islands. The growing attention for the Italian hybrid sparrow and increasing knowledge on its biology and genetic constitution greatly contrast the complete lack of knowledge of the long-known phenotypical hybrid sparrow populations from North Africa. Our study provides new data on the breeding biology and variation of mitochondrial DNA in three Algerian populations of house sparrows, Spanish sparrows, and phenotypical hybrids. In two field seasons, the two species occupied different breeding habitats: Spanish sparrows were only found in rural areas outside the cities and bred in open-cup nests built in large jujube bushes. In contrast, house sparrows bred only in the town centers and occupied nesting holes in walls of buildings. Phenotypical hybrids were always associated with house sparrow populations. House sparrows and phenotypical hybrids started breeding mid of March, and most pairs had three successive clutches, whereas Spanish sparrows started breeding almost one month later and had only two successive clutches. Mitochondrial introgression is strongly asymmetric because about 75% of the rural Spanish sparrow population carried house sparrow haplotypes. In contrast, populations of the Italian hybrid form, P. italiae, were genetically least diverse among all study populations and showed a near-fixation of house sparrow haplotypes that elsewhere were extremely rare or that were even unique for the Italian Peninsula. Such differences between mitochondrial gene pools of Italian and North African hybrid sparrow populations provide first evidence that different demographic histories have shaped the extant genetic diversity observed on both continents.

Nesting sites of house sparrows, Spanish sparrows and phenotypical hybrids in Algeria; (A, C) Passer domesticus: nest with eggs and burrows in brick wall, both at Djelfa – phenotypical hybrids show the same nesting site preference; (B, D) Passer hispaniolensis: nest with eggs and breeding colony in jujube bushes, both at Hassi El-Euch (photos: A. Ait Belkacem)

The Sahara Desert is one of the largest land-based barriers on the Earth, crossed twice each year by billions of birds on migration. Here we investigate how common swifts migrating between breeding sites in Sweden and wintering areas in sub-Saharan Africa perform the desert crossing with respect to route choice, winds, timing and speed of migration by analysing 72 geolocator tracks recording migration. The swifts cross western Sahara on a broad front in autumn, while in spring they seem to use three alternative routes across the Sahara, a western, a central and an eastern route across the Arabian Peninsula, with most birds using the western route. The swifts show slower migration and travel speeds, and make longer detours with more stops in autumn compared with spring. In spring, the stopover period in West Africa coincided with mostly favourable winds, but birds remained in the area, suggesting fuelling. The western route provided more tailwind assistance compared with the central route for our tracked swifts in spring, but not in autumn. The ultimate explanation for the evolution of a preferred western route is presumably a combination of matching rich foraging conditions (swarming insects) and favourable winds enabling fast spring migration. 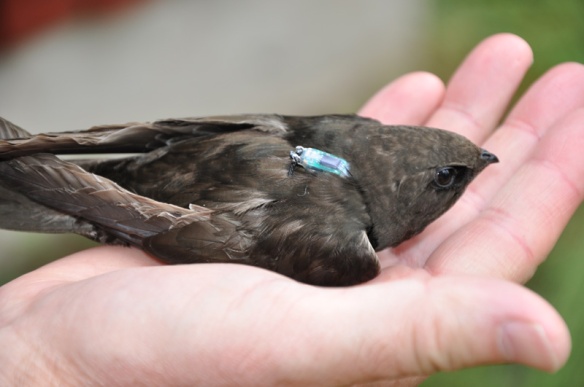 Map of stopover areas before initiating migration across the Sahara Desert (triangles), stopover areas on passage (filled yellow circles) and stopover or final wintering areas at arrival after crossing the barrier (squares), for different populations of common swifts breeding in north, central and south Sweden as recorded for spring and autumn by miniature geolocators. Solid lines are connecting routes for birds recorded outside equinox periods, while dashed lines connect starting and endpoints for swifts passing the Sahara during the equinox period. Lines connecting departure, stopover and arrival events simplify the assumed migratory pathway of the birds (Åkesson et al. 2016 – DOI: 10.1098/rstb.2015.0393)

Like the majority of Columbiformes, the Laughing Dove Spilopelia senegalensis is sexually monomorphic in plumage, but seems to be slightly dimorphic in size. However, due to the lack of studies little is known about the sexual size dimorphism in this species. In this work, we used morphometric data on a sample of 61 Laughing Doves from southern Tunisia, and sexed using a DNA-based method, to assess size differences between males and females and to determine a discriminant function useful for sex identification. The results showed that wing length was the most dimorphic trait, which could be due to the effects of sexual selection. The best function for the discrimination between sexes included wing length and head length, which is comparable with findings on other dove species. This discriminant function accurately classified 89% of birds, providing a rapid and accurate tool for sex identification in the studied population. Further data from different populations are needed for firmer conclusions about the extent of sexual size dimorphism and the reliability of the morphometric sexing approach in this dove species.

The study of the reproductive biology of House Martins Delichon urbica was carried out in the cities of Guelma and Hammam Debagh, Northeast Algeria during two years 2013 and 2014. Birds of this species produce two broods per year and per breeding pair. At both study sites, the egg-laying period lasted for almost four months. Egg weight and volume differed between broods and years. The mean clutch size was 3.87 ± 1.29, 4.19 ± 1.02 in Guelma and 3.93 ± 1.13, 3.64 ± 1.30 in Hammam in 2013 and 2014, respectively, with a seasonal decline. Hatching success reached 69 and 74.25% in Guelma, and 74.20 and 63.39% in Hammam in 2013 and 2014, respectively. Fledging success was 64.57 and 72.62% in Guelma, whereas, in Hammam it was 72.22 and 58.16% in 2013 and 2014, respectively. Hatching failure was the main cause of mortality. The breeding parameters and morphometrics of the House Martin’s eggs in Algeria determined during our study differed from those reported in previous studies carried out in different parts of Europe.

In conclusion, our results suggest that carotenoid-based colouration plays a more important role in mate choice than does body size in Mediterranean Yellow-legged Gulls. However, these results might have been impacted by the study’s small sample size. Moreover, our data are descriptive in nature and reveal nothing about potential underlying processes. We thus believe that additional studies involving larger data sets obtained from marked birds and field experiments are necessary to clarify mate choice mechanisms in this species.

Wind is among the most important environmental factors shaping birds’ migration patterns. Birds must deal with the displacement caused by crosswinds and their behavior can vary according to different factors such as flight mode, migratory season, experience, and distance to goal areas. Here we analyze the relationship between wind and migratory movements of three raptor species which migrate by soaring–gliding flight: Egyptian vulture Neophron percnopterus, booted eagle Aquila pennata, and short-toed snake eagle Circaetus gallicus. We analyzed daily migratory segments (i.e., the path joining consecutive roosting locations) using data recorded by GPS satellite telemetry. Daily movements of Egyptian vultures and booted eagles were significantly affected by tailwinds during both autumn and spring migrations. In contrast, daily movements of short-toed eagles were only significantly affected by tailwinds during autumn migration. The effect of crosswinds was significant in all cases. Interestingly, Egyptian vultures and booted eagles showed latitudinal differences in their behavior: both species compensated more frequently at the onset of autumn migration and, at the end of the season when reaching their wintering areas, the proportion of drift segments was higher. In contrast, there was a higher drift at the onset of spring migration and a higher compensation at the end. Our results highlight the effect of wind patterns on the migratory routes of soaring raptors, with different outcomes in relation to species, season, and latitude, ultimately shaping the loop migration patterns that current tracking techniques are showing to be widespread in many long distance migrants. 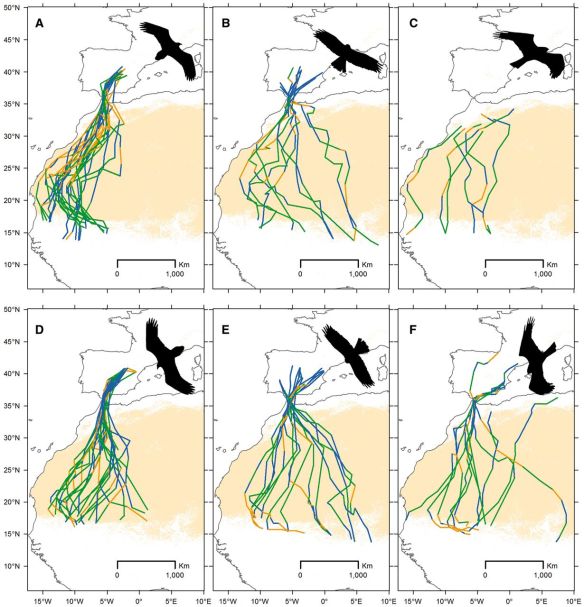 Status of the White-headed Duck Oxyura leucocephala in Northeast Algeria. The globally threatened White-headed Duck is one the most rare duck species in the Western Palearctic. Its distribution in Algeria is mainly restricted to the northeastern part of the country and the Hauts-Plateaux. In 2013 and 2014, 694 individuals were counted. The studied sites harboured distinct numbers in winter and in summer of the two years. The p-values (Kruskal Wallis test) were lower than 0.05. The Lake Tonga showed the highest numbers in winter and the Boussedra wetland in summer. The results indicated a stable occurrence in the studied areas without any difference between the two years. The PCA analysis showed a significant correlation between the distribution of this species and three following main factors: vegetation, surface area and water depth at the Boussedra wetland, Lake Tonga and Garaet Hadj-Taher. The lower occurrence in other parts of the studied areas, particularly on the Hauts-Plateaux, is mainly the consequence of drying out process and habitat degradation. 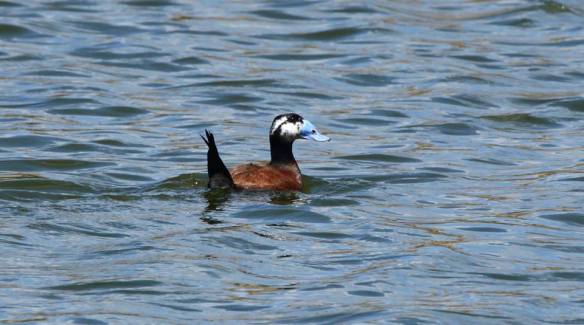 Boumezrane’s forest is a significant center for biodiversity. Since last year the forest is facing destruction and degradation. Although the forest is recognized as an important area for avian diversity, it has never received ornithological attention. Many studies have been conducted on the relationship of birds with habitat features, however their associations are not completely understood. Hence we need information on the relationship between occurrence of birds and structural components of zeen oak habitats. We examined relative bird abundance by using the point count method and its relationship to environmental descriptors. A total of 68 visits of 39 bird species were recorded in the zeen oak stands. Avian species richness at each point count ranged between four and 14 species. The most dominant families in number of pairs are Paridae (121 pairs), Turdidae (115.5 pairs), Sylviidae (57.5 pairs), Picidae (55.5 pairs), and Fringillidae (43.5 pairs). They cater for more than 70% of the total abundance of the entire community. Using principal component analysis and canonical correspondence analysis methods, we determined that the size of trees with the height of shrub layer is an important criterion for differentiation of the avifauna of Boumezrane. The second criterion is the volume of tree stratum.